The Banxia custom add-in for PowerPoint is now no longer supported. It is available for those who wish to use it, but you can also use the Turning Technologies add-in from their final release (you may need a DLL from an old copy of Office), but we recommend that you use the new Flow software for your future needs.

This page has a download of our PowerPoint add-in that you can use with Microsoft Office to link to eInstruction Interwrite Response.

For a while, the eInstruction add-in for PowerPoint did not work correctly with Office 2010 and PowerPoint 2010. If when you start a slideshow you get a blue rotating circle then you have a problem version. You can either use our add-in, or you can upgrade your Response software to at least 6.71 which has a fixed add-in. If you use our add-in it will operate as you have used the Interwrite version.

The Banxia add-in is now available in both 32-bit and 64-bit versions. Note though that Microsoft recommends that you do not use the 64-bit version of Office except for development and testing. The 32-bit add-in IS compatible with 64-bit versions of Windows though, just not the Office 64-bit.

If you wish to have the 64-bit version for testing, please see the bottom of this page. 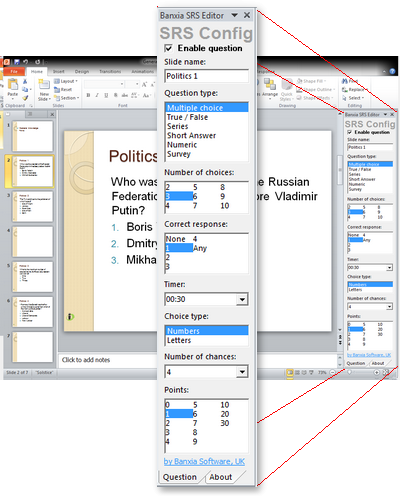 To use the add-in, uninstall the Interwrite add-in using the Start menu option to Unregister the add-in (this can also be done using a button in the Banxia add-in). Then run the MSI that is provided in the download, which will register this new version. The panel will be available automatically. If you close it, you can show it again using the button in the Banxia Response section of the toolbar.

BanxiaPPT4Response.zip – 32-bit version for 32-bit Office. See above regarding 64-bit.

This download contains an MSI file which can be installed by double-clicking in Windows to run the Microsoft Installer system. It can be used in a managed desktop if required, or as-is. Please note that this is no longer actively supported.

The download of the Banxia 64-bit PowerPoint add-in is also available. This is not needed for 64-bit Windows, but only if you are using the 64-bit Office that Microsoft do not recommend.

This release version will not expire, but we recommend that you check back here if you have a problem.

If you find that something does not work as you expect, please let us know as soon as possible.

Fixed an issue with the Office 2013 new presentation preview displays, which caused an exception dialog.

Minor fixes, default to Response operation only. The options dialog is now not needed.

Added compatibility with Office 2013, and removed the Interact HE options for the moment. Design is blended with Office a bit more, and the tab bar title is made “SHOUTY” in Office 2013 to look better.

Some of the SMART board compatibility fix was removed in this, as their new version has been out a while so it is unlikely to be needed.

Improved default options for Interact HE use.

Fix for interacting with Response 6.72 which changes the application window name. This would show a “Database already open” error if you started Response and then PowerPoint. 64-bit Office version available freely now.

Support for Interact HE if installed, added option to ignore INI failure when network disconnected. Workaround for SMART InkAware causing failure of events in PowerPoint.

This version fixes an issue where the correct answers could not be edited.

Update 26 Oct: This version fixes an issue with international dates; with slide titles with a comma in them; adds a reminder on opening to disable the Interwrite version; operates correctly if the first slide has a question. We recommend updating to build 222 by downloading and installing again. We expect that an untimed version will be released within a week. Please keep positive and negative feedback coming so we know it is working for you.